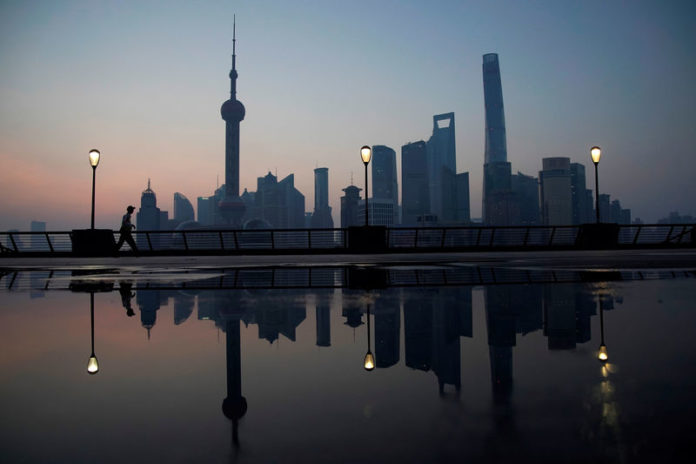 © Reuters. FILE PHOTO – A security guard walks on the bund in front of the financial district of Pudong in Shanghai

BEIJING (Reuters) – New bank loans in China likely rebounded in November after a sharp drop the previous month, a Reuters poll showed, as the government sought to keep ample liquidity in the financial system to cushion the slowing economy.

Money supply growth likely remained at a record low, however, while outstanding loan growth may have eased slightly for a second month, reinforcing views that the central bank will have to ease policy further in coming months.

The People’s Bank of China (PBOC) has already cut banks’ reserve requirements (RRR) four times so far in 2018, with more in coming months and possibly before the end of this year.

The PBOC also has brought down interbank market rates and is pressing banks to keep lending to cash-starved companies, though lenders are reluctant to risk another spike in bad loans.

Chinese banks were expected to have issued 1.12 trillion yuan ($162.94 billion) in net new yuan loans in November, much higher than the 697 billion yuan in October, which is typically a slow month due to seasonal factors, and roughly the same as a year earlier, according to a Reuters survey of 22 economists.

Broad M2 money supply growth in November was seen unchanged from the previous month at 8.0 percent, which matched a record low hit in June.

Growth of M1 money supply, which represents the level of corporate cash deposits, slid to a multi-year low in October, suggesting faltering business confidence and growing financial strains. Corporate bond defaults are already on track to hit a record this year.

Annual outstanding yuan loan growth was seen at 13.0 percent for November, slightly lower than a 13.1 percent gain in October and easing for a second month.

To be sure, loan growth in China has looked more solid on a longer horizon, with new bank loans in the first 10 months already eclipsing last year’s full-year record of 13.53 trillion yuan.

But signs are emerging that loan demand has remained weak overall.

Mortgage loan growth looks set to soften as the property market cools, while special bonds issued by local governments are expected to see a decline in the past month.

Local authorities had maxed out their bond quotas after a rush of debt issuance in the third quarter, raising the risk of a start-stop cycle in infrastructure spending which the government is counting on to lead an economic turnaround.

China’s total social financing (TSF), a broad measure of credit and liquidity in the economy, is estimated to have risen to 1.33 trillion yuan in November after falling sharply to 728.8 billion yuan in October, according to the poll.

TSF had grown 10.2 percent on year in October, again an all-time low.

China’s policymakers are expected to further loosen fiscal and monetary conditions in coming months if domestic and external demand continue to deteriorate, with economists largely expecting economic conditions to get worse before they get better.

But a temporary trade war ceasefire agreed by the United and China early this month may have removed some of the more immediate pressure for strong action. Washington has pledged to hold off on further tariff measures, which had been slated for Jan. 1., to allow 90 days of negotiations with Beijing.

Queen Elizabeth May Abdicate In 2021 At 95; Charles Becomes Prince Regent

Where to do business in 2019; and where to avoid

Turkey stocks lower at close of trade; BIST 100 down 0.47% By Investing.com