Home Finance China and U.S. Talk on Trade Ahead of January Negotiations By Bloomberg 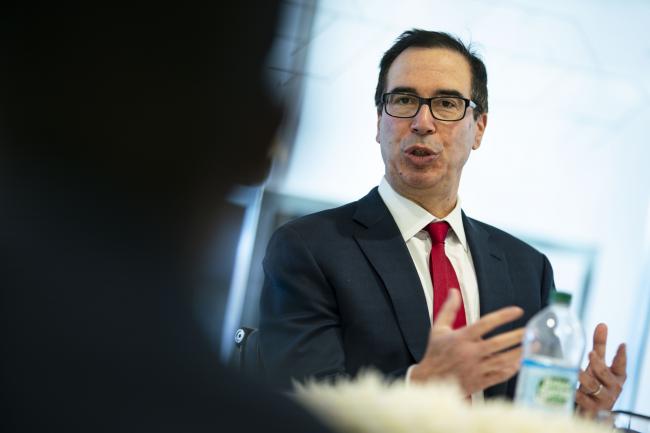 (Bloomberg) — China and the U.S. held vice-ministerial level talks on Wednesday to discuss the ongoing trade dispute as they move closer to meeting in January.

The two sides spoke by phone according to China’s Ministry of Commerce, and have held several rounds of talks in recent weeks, Treasury Secretary Steven Mnuchin told Bloomberg on Tuesday in Washington. They plan to hold a formal, face-to-face meeting in January to negotiate a broader truce in their trade wars but are unlikely to meet in person before then, Mnuchin said.

“We’re in the process of confirming the logistics of several meetings and we’re determined to make sure that we use the time wisely, to try to resolve this,” Mnuchin said. Both sides are now focused on trying “to document an agreement” by a March 1 deadline for their current tariffs truce to run out. “We expect there will be meetings in January,” he said. Previously the administration hadn’t been specific on the timing of talks.

The two sides are planning to meet in January, according to Chinese officials with knowledge of the discussions who asked not to be named as the talks were private. China’s Ministry of Commerce didn’t respond to a faxed request for comment.

Mnuchin said neither he nor President Donald Trump were aware of the arrest of a senior executive from Huawei Technologies Co. when they met with China’s Xi Jinping for dinner on Dec. 1, the same day that the company’s chief financial officer was arrested in Canada.

The Treasury secretary also sought to play down the president’s declaration last week that he would be willing to intervene on Huawei’s behalf if it was necessary to help reach a trade deal between the world’s two largest economies.

“We’ve been very clear and China understands that these are separate tracks,’’ Mnuchin said.

He and the president had not had “any direct conversations’’ about the Huawei case, Mnuchin said. He also declined to comment on whether the Treasury Department was preparing a broader case against the Chinese telecommunications-equipment provider, which has been accused by the U.S. of conspiring to violate U.S. sanctions against Iran.

Hawks in the Trump administration have long raised questions about just how much the U.S. should trust any promises of economic reforms made by Xi given the experience of past administrations in dealing with Beijing. But Mnuchin said the two sides had agreed that any eventual deal would be “enforceable and verifiable and have specific dates on it.”

“We are determined that if we have an agreement it will be specific enough that time frames and details and everything else will be laid out,’’ he said.

Reducing the trade deficit with China remained a major priority for Trump but Mnuchin said the administration understood it would take time and was also focused on securing structural changes in the Chinese economy that would help balance trade. The U.S.’s monthly trade deficit in goods with China hit a record in October and is on track to have expanded through the first two years of the Trump presidency.

“I don’t think that we’d expect that overnight,’’ Mnuchin said of the prospect of eliminating the trade deficit with China. But he said the U.S. and China had agreed on the need for more balanced trade and that would set the stage for meaningful change.

The U.S. was determined to secure the same market access for American companies to China that Chinese companies get to the U.S., Mnuchin said. “And if we do that and there are structural changes, the trade deficit by definition will be a lot more balanced,’’ he said.

“I don’t think there is a question of there is a win for them, or a win for us,” Mnuchin said. “I think that there could be a win for both in the sense of they have a large, growing middle class that wants U.S. goods. So I think there’s an economic outcome that’s good for both of us.’’

Trump has agreed to put on hold a scheduled increase from 10 percent to 25 percent in tariffs on some $200 billion in imports from China while the negotiations take place through March 1. In return China has agreed to resume buying American soybeans and to at least temporarily lower retaliatory tariffs on U.S. auto exports imposed last summer.

Uncertainty about the substance of the truce agreed to over a dinner between Trump and Xi on the sidelines of the Group of 20 summit has fed volatility in financial markets in recent weeks. So too have growing concerns about a slowdown in the Chinese economy.

(Updates with Chinese officials confirming the plan in fourth paragraph.)

Apple to Build New $1B Campus in Texas

Japan Can Trim Stimulus Without Repeating Mistakes By Bloomberg

Europe should be afraid of Huawei, EU tech official says