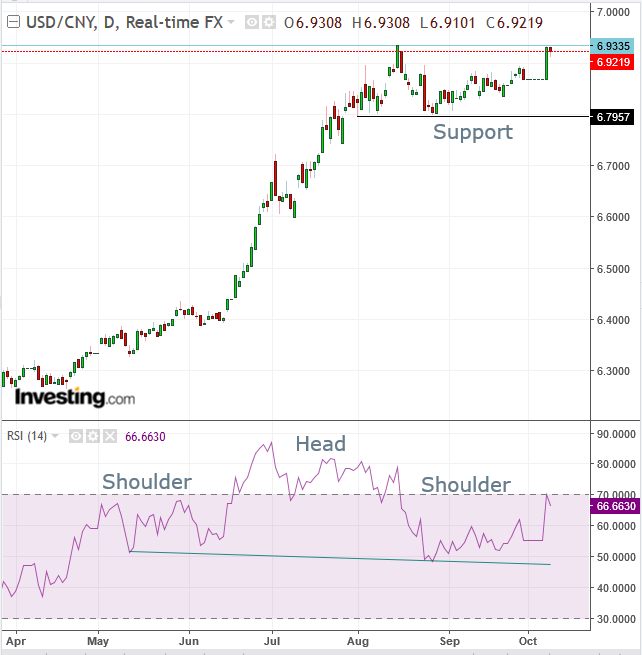 Since March, China’s is nearly 11 percent weaker. That’s when the Sino-US trade war erupted due to President Donald Trump’s inflamatory rhetoric. Yesterday’s 0.9 percent drop brought the renminbi to its lowest level since January 2017, when China dropped its currency’s strict peg to the dollar.

If the yuan falls even an additional half percent, it will be at the lowest level since mid-2008. Reports are circulating that Trump is pressuring Treasury Secretary Steven Mnuchin to declare China a currency manipulator in a report due out next week. If this indeed occurs, it would be the first time this happened since 1994.

Markets are obviously concerned. Such a move would push the current trade dispute to new lows.

So, is China really manipulating their currency? They’re known to be ultra-sensitive to how others view their strength—especially the West and most of all the US. However, devaluing their currency may be the only way to combat rising import costs amid shrinking growth without compromising their show of strength to the world’s superpower. Of course, it’s impossible to say definitively whether or not China is manipulating their currency, however this may provide an opportunity to bet on the yuan.

The USD/CNY pair has found resistance by the August 15 peak, potentially forming a double-top. The RSI may be developing an H&S top.

These technical events suggest the USD/CNY is more likely to turn around, rather than continue rising. However, should prices escalate past the 6.9348 peak, they may blow out the weakening momentum, as demonstrated by the RSI H&S, in which case market participants will get on the same side.

This psychological and technical reversal can definitely happen if the Treasury designates China as a currency manipulator.

Note: This position, like others, is a “setup,” not to be entered without prerequisites satisfied. As with previous setups, current technicals are against the position. We are preparing for a technical reversal.

Conservative traders should wait for at least a full percent higher than the January 2016, 6.9651 high, followed by consolidation with at least one long green candle following a retest of the 2016 peak.

Moderate traders would wait for a close at least a full percent above the 6.9348 peak of August 15, followed by evidence of consolidation, with at least one long green candle following a correction supported by the August peak’s broken resistance.

Aggressive traders may short on the hope of a USD/CNY reversal, in which the yuan would strengthen, relying on the August peak resistance and the bearish momentum.

5 steps to making sure you’re ready to retire

Taiwan stocks higher at close of trade; Taiwan Weighted up 2.44% By Investing.com

Traders Turn Negative on Nvidia as Semis Sag By Investing.com