Home Investing Chart Of The Day: Rebound Of Chipmaker AMS Could Provide A Short... 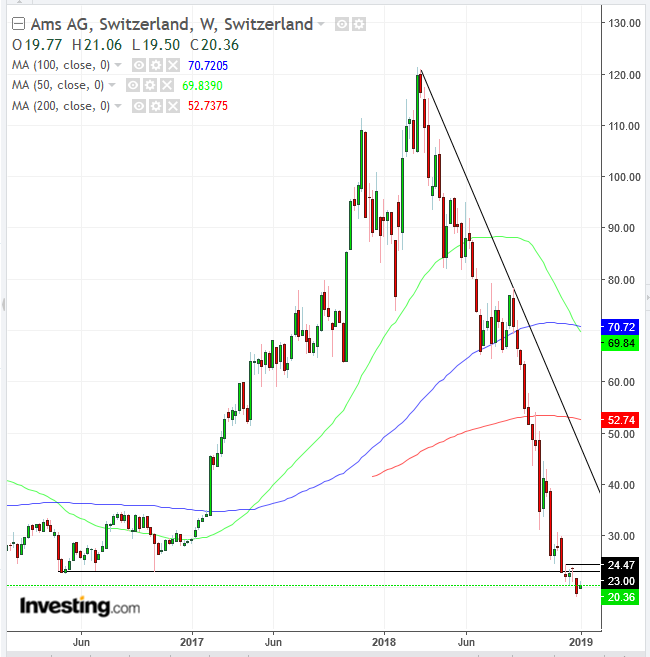 Shares of Austrian chipmaker Ams AG (SIX:), which trades on the Zurich-based SIX Swiss Exchange, are up more than 8 percent this morning. The semiconductor stock is recovering from last week’s 19 percent plunge, which was spurred by Apple’s (NASDAQ:) warning on Wednesday that it was cutting its sales outlook on weakening Chinese demand, a result of the world’s second largest economy slowing.

AMS, which makes facial recognition technology and specializes in sensors, is a supplier for Apple devices. For months now it has been cutting its sales forecasts, an early signal that iPhone sales may not be as robust as the US tech giant had previously indicated.

Today’s gains have been driven by Friday’s announcement from the People’s Bank of China (PBoC) that it was lowering the amount of cash reserves banks had to have on hand, allowing for easier lending, in an effort to spur the local economy. An additional catalyst: Sino-US trade talks which begin today in Beijing.

As such, last week’s rout seems to have become a buying opportunity. Or maybe not.

The RSI bounced from 25—its most oversold level since the 2008 crash—toward 27; the MACD is setting up to provide a buy signal, as the short MA crosses above the long MA.

However, AMS’s stock is in a bear market and thus in a downtrend. The 50 WMA just crossed below its 100 WMA. More significantly, Thursday’s rout pushed the stock to its most depressed level since December 2013, registering a new low in this bear market, falling below the stock’s May 2016-stronghold-low support.

Conservative traders would probably wait for a rally to the long-term downtrend line since the March 2018 record-peak, currently at $46—whose resistance is confirmed by the 50 DMA—before entering a short.

Moderate traders may be content with a rally to the 50 DMA, at $29, for a short entry.

Aggressive traders may risk a short at the $24 level, the December 13 peak resistance.

Retail markets in India: Opportunities in a dynamic world

VW plans to sell electric Tesla rival for less than $23,000: source By Reuters

GST October collection: Here are the possible reasons behind Rs 1...

Your electricity bill may rise if you live in these states;...