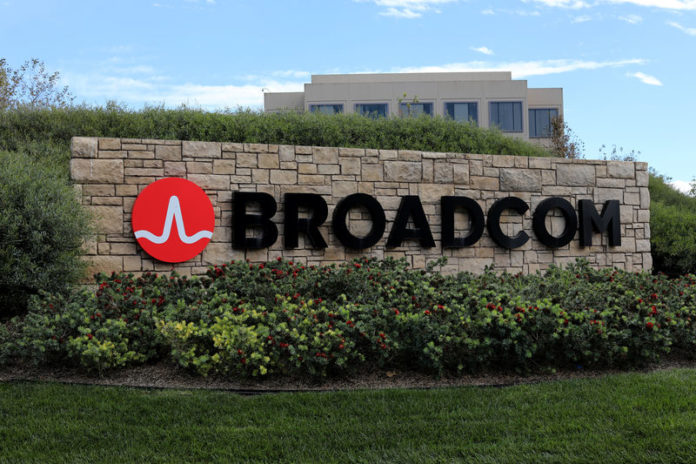 © Reuters. A sign to the campus offices of chip maker Broadcom Ltd, who announced on Monday an unsolicited bid to buy peer Qualcomm Inc for $103 billion, is shown in Irvine, California

(Reuters) – Broadcom Inc (O:) on Thursday reported fourth-quarter revenue and profit above analysts’ estimates, driven by strong demand for its enterprise storage and networking products, sending its shares up 6 percent in extended trading.

The chipmaker also forecast full-year 2019 revenue of $24.50 billion, above analysts’ estimates of $22.40 billion, according to IBES data from Refinitiv.

Broadcom’s upbeat results came in contrast to other Apple Inc (O:) suppliers, which have cut their forecasts, suggesting tepid demand for new iPhones.

“Sustained demand within our semiconductor segment will be augmented by the newly acquired mainframe and enterprise software businesses to our infrastructure software segment.”

The chipmaker acquired software maker CA Technologies for $19 billion earlier this year, aiming to diversify its revenue stream in the wake of a cooling semiconductor cycle. The move came after it failed to buy Qualcomm Inc (O:) in the biggest-ever technology deal.

Analysts on average were expecting earnings of $5.58 per share on revenue of $5.39 billion.