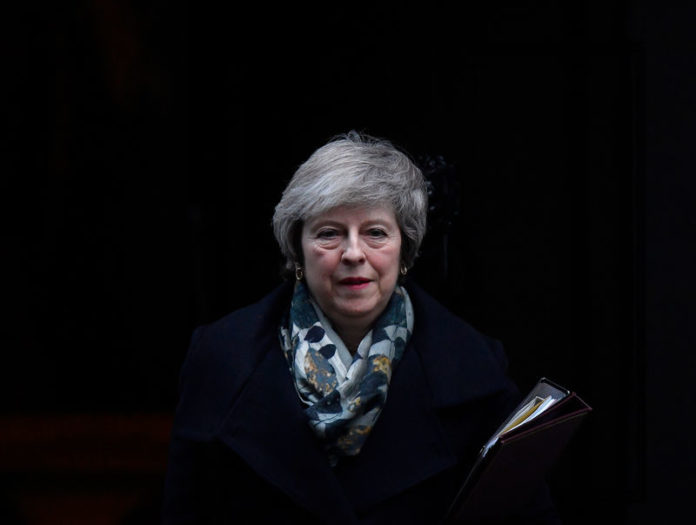 By Kylie MacLellan and Sarah Young

LONDON (Reuters) – Prime Minister Theresa May and her ministers will on Tuesday step up preparations for a “no deal” Brexit, an outcome made more likely by a deadlock in parliament over the British leader’s divorce deal with the European Union.

With just over 100 days until Britain is due to leave the EU, May is yet to win the support of a deeply divided parliament for the deal she struck last month with Brussels to maintain close ties with the bloc.

She has said a delayed vote on her deal will take place in mid-January, prompting some lawmakers to accuse her of trying to force parliament into backing it by running close to the March 29 exit day.

May, who last week survived a confidence vote within her Conservative Party, has warned lawmakers that the alternatives to her deal are leaving without an agreement or no Brexit.

“We’re going to be discussing ‘no deal’ planning today,” International Development Secretary Penny Mordaunt told reporters. “It’s absolutely right that we step up ‘no deal’ planning now. Not only do we need to prepare the country, but it’s also the best way that we will ensure that we get a deal.”

This month, finance minister Philip Hammond said he had made more than 4.2 billion pounds ($5.3 billion) available for Brexit planning since the 2016 referendum and would be allocating a further 2 billion pounds to government departments.

May’s spokesman said that would be done “shortly”.

Britain’s economy has slowed since the 2016 referendum vote to leave the EU and there is no guarantee that businesses and consumers will retain tariff-free access to European goods after Brexit.

(On the way to Brexit: https://tmsnrt.rs/2QMkbnu)

The British Chambers of Commerce forecast on Tuesday that economic growth this year and in 2019 looks set to be the weakest since Britain emerged from recession in 2009, due to a freeze in business investment and weak consumer demand ahead of Brexit.

Parliament is at an impasse over Brexit, with factions pressing for different options for future ties, leaving without a deal or remaining in the EU.

May is seeking assurances from the EU over the so-called Northern Irish “backstop” – an insurance policy to prevent the return of a hard border between the British province and EU-member Ireland that its critics fear will trap Britain in a customs union with the EU indefinitely.

With the EU unlikely to offer concessions that would win over lawmakers and May repeatedly ruling out a second referendum, the risk of a no-deal has increased, a scenario that would mean an abrupt exit with no transition that some businesses fear would be catastrophic for the world’s fifth largest economy.

“It’s not what we want to do, it’s not what we still expect to do because we want to see the deal secured, the vote through parliament, but I think it is right and proper that we maintain our work on preparing for a no-deal,” he said.

“I’m not going to try and pretend otherwise that we’re not stepping up our preparations for no-deal … There will clearly be consequences of a no-deal in the short term.”

Mike Amey, head of sterling portfolios at fund management giant PIMCO, said there was “low probability” of no-deal as there was not a majority of lawmakers who would accept it.

Britain would be more likely to extend or revoke its Article 50 notice to leave the EU, he said. May has so far ruled out doing so.

5 Best Bets Against The Spread For Week 10 Include Packers, Eagles, Bengals

Economy can hold up to market turbulence, rate hikes on track...

Grow: Your guide to how much to spend on holiday gifts