Home Banking Brexit breakdown could be bullish for U.S. stocks 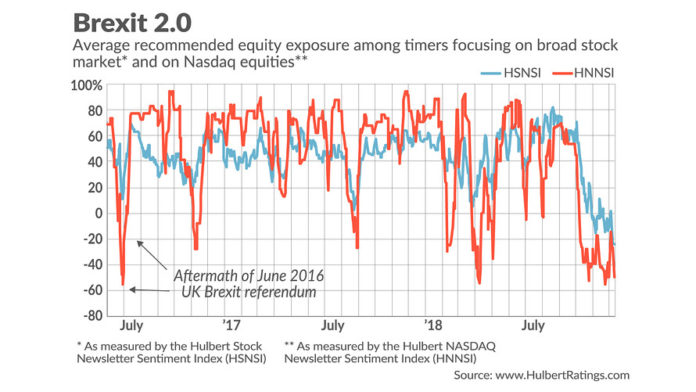 Stock market timers haven’t been this gloomy since late June 2016, after the U.K.’s Brexit referendum. And that’s encouraging, since the extreme pessimism in the wake of that vote provided a textbook illustration of a contrarian buy signal for U.S. stocks.

Recall that stock investors’ mood took a deep dive in the immediate aftermath of that referendum, in the process creating the sentiment foundation for a powerful contrarian buy signal. By the end of 2016, the S&P 500


was 12% higher than where it stood at the post-referendum low; the Nasdaq Composite

Consider the two stock market sentiment indices I calculate based on the average recommended exposure level of around a hundred monitored short-term stock market timers. The first reflects recommended exposure to the broad stock market (as represented by the Hulbert Stock Newsletter Sentiment Index, or HSNSI), and the second reflects exposure to the Nasdaq market (as represented by the Hulbert Nasdaq Newsletter Sentiment index, or HNNSI).

The HSNSI currently stands at minus 21.2%, which means that the average timer focusing on the broad U.S. stock market is recommending that more than a fifth of their trading portfolios be allocated to going short. The HNNSI is even lower at minus 55.4%, indicating that — on average — half of these Nasdaq-oriented timers’ trading portfolios are currently short the market.

Both readings indicate that short-term stock timers are making aggressive bets that the U.S. stock market will decline. To put these readings into perspective, consider that the HSNSI currently is lower than more than 98% of daily readings since 2000; the HNNSI currently is lowest than 92% of the readings. That’s noteworthy, considering myriad events over the past two decades that presumably would cause market timers to be more pessimistic than they are today — the 2008-09 Financial Crisis and the bursting of the internet bubble, to name two of the more obvious ones.

Note carefully that contrarians take no position on whether Brexit is or is not a good idea as a policy matter. In retrospect, of course, given the intense and ongoing political difficulties involved in Britain negotiating an actual exit from the European Union, market timers’ initial pessimism in the wake of the June 2016 referendum seems prescient.

Contrarians focus on how investors are reacting and, at that time, could predict that bad as things might become in the wake of Brexit, the outlook wasn’t quite as awful as the doom-and-gloomers believed. It’s not just Monday morning quarterbacking for me to point this out now; it was clear in more or less real time then.

Fast forward to today. There no doubt are many legitimate things to worry about, just as there were in June 2016. But practiced contrarians suspect these things aren’t the worst-case scenarios market timers paint. When those skeptics come around to seeing the market’s glass as half-full rather than half-empty, a sizeable stock rally should ensue.

For more information, including descriptions of the Hulbert Sentiment Indices, go to The Hulbert Financial Digest or email mark@hulbertratingscom .

China stocks higher at close of trade; Shanghai Composite up 1.02% By Investing.com

Redgate Software chooses Brisbane over Sydney for new Australia base