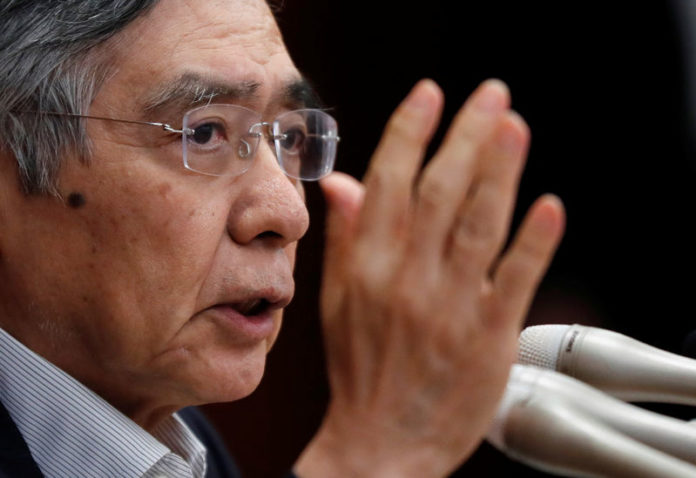 © Reuters. BOJ Governor Kuroda speaks during a news conference at the BOJ headquarters in Tokyo

TOKYO (Reuters) – The Bank of Japan is set to maintain its ultra-loose monetary policy on Thursday and warn of heightening risks to the economy, as fears of slowing global growth jolt markets and narrow the window of opportunity to dial back crisis-mode stimulus.

The nine-member board may also discuss recent declines in Japan’s long-term interest rates, as 10-year yields threaten to slide below zero and undermine the BOJ’s efforts to steepen the yield curve to give financial institutions breathing space.

The BOJ is in a dilemma. Years of heavy money printing has left it with little ammunition to battle another recession, and the global economic slowdown is depriving the central bank of any near-term chance to restock its tool-kit.

“The BOJ doesn’t have much tools left to ease policy,” said Shigeto Nagai, head of Japan economics at Oxford Economics.

“But with global yields falling on growing pessimism over the global economy, it would also be hard for the BOJ to do anything that could be seen as policy normalization.”

At the two-day rate review ending on Thursday, the BOJ is widely expected to keep its short-term rate target at minus 0.1 percent and the 10-year yield target around zero percent under a policy dubbed yield curve control (YCC).

While the central bank is set to maintain its view Japan’s economy will continue expanding moderately, Kuroda may warn of heightening risks including from the Sino-U.S. trade war, slowing demand in China and market volatility, analysts say.

Subdued inflation has forced the BOJ to maintain a massive stimulus despite the rising cost of prolonged easing, such as the hit to financial institutions’ profits from near-zero rates.

The central bank tweaked its policy framework in July to make it more sustainable, including by allowing bond yields to move more flexibly around its zero percent target.

The move was partly intended to allow for a natural rise in long-term rates, so financial institutions could reap profits from a steepening yield curve.

Sources have told Reuters the BOJ will tolerate negative long-term rates, as long as the 10-year yield moves within the range of around minus 0.2 to plus 0.2 percent set in July.

Still, any such market moves could cause unease among some BOJ board members, who have publicly voiced concern over the dangers of excessive yield declines, analysts say.

“The BOJ could slow its bond buying to prevent excessive yield falls. But doing so too much risks pushing up the yen,” said Takahide Kiuchi, a former BOJ board member who is now executive economist at Nomura Research Institute.

“This is just an illustration of the flaws of YCC.”

Whatever happened to Trump’s crackdown on ‘the hedge fund guys?’

Brazil’s Bolsonaro says he can keep central bank chief Goldfajn in the job By...

Brexit deal needed for end to austerity in UK: Hammond By...