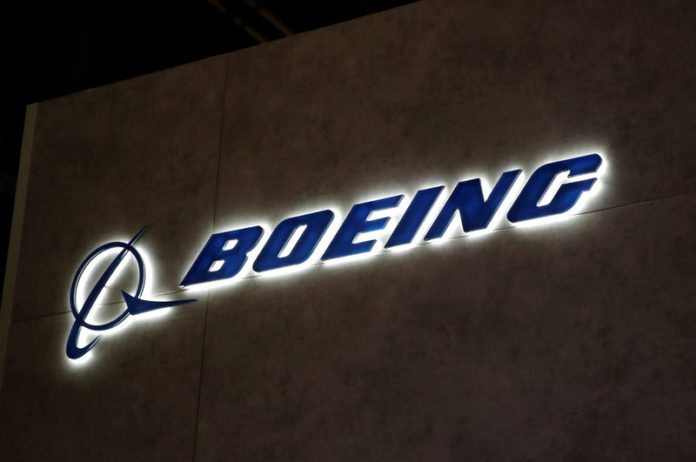 © Reuters. FILE PHOTO: A Boeing logo is pictured during EBACE in Geneva

ZHOUSHAN, China (Reuters) – Boeing Co (N:) opened its first 737 completion plant in China on Saturday, a strategic investment aimed at building a sales lead over arch-rival Airbus (PA:) in one of the world’s top travel markets that has been overshadowed by the U.S-China trade war.

The world’s largest planemaker was also poised to deliver the first of its top-selling 737s completed at the facility in Zhoushan, about 290 km (180 miles) southeast of Shanghai, to state carrier Air China (SS:) (HK:) during a ceremony on Saturday with top executives from both companies.

Boeing and Airbus have been expanding their footprint in China as they vie for orders in the fast-growing aviation market, which is expected to overtake the United States as the world’s largest in the next decade.

Boeing invested $33 million last year to take a majority stake in a joint venture with state-owned Commercial Aircraft Corp of China (COMAC) to build the completion center, which installs interiors and paints liveries.

Chicago-based Boeing calls itself the top U.S. exporter and delivered more than one out of every four jetliners it made last year to customers in China, where it forecasts demand for 7,700 new airplanes over the next 20 years valued at $1.2 trillion.

However, the plant’s inaugural ceremony was overshadowed by tensions between the United States and China as they engage in a bruising tit-for-tat tariff war. The world’s two largest economies are in a 90-day detente to negotiate a trade deal.

“Am I nervous about the situation? Yeah, of course. It’s a challenging environment,” John Bruns, President of Boeing China, told reporters on a conference call earlier on Saturday.

“We have to keep our eye on the long game in China. Long term, I’m optimistic we will work our way through this,” he said.

While the trade frictions have hurt businesses such as U.S. soy bean farmers and Chinese manufacturers, their impact on Boeing has been unclear. U.S.-made aircraft have so far escaped Beijing’s tariffs.

Bruns said he remained optimistic about the outcome of trade talks between the United States and China and described aviation as a “bright spot” amid tensions between the two countries.

Asked about the possibility of technology transfer agreements between Boeing and COMAC, Bruns stressed that the purpose of the plant was for installing seats, painting vehicles, and completing the planes’ final delivery.

“That’s only a part of what we do in the production of airplanes,” he said.

Boeing aims eventually to hit a delivery target of 100 planes a year at Zhoushan, although Bruns deflected a question on how quickly it would reach that level and said Boeing had no plans to expand work to other aircraft types.

Boeing also hopes the plant will relieve pressure at the Seattle-area facility where it plans to boost production next year of its best-selling 737 narrowbody aircraft but has struggled with production delays.