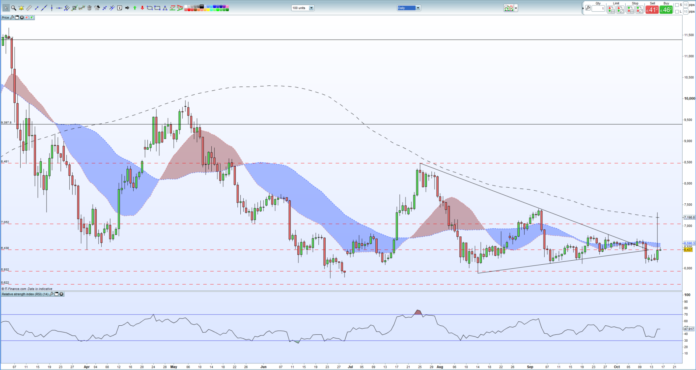 After rising as much as 10% on Monday, bitcoin, the world’s largest digital currency, broke out of a triangle formation, which if holds, one analyst said could point to another leg higher, testing another important level.

“This price action—shown on the chart below—was quickly sold-off but did decisively break the downward triangle, and needs to be watched carefully,” wrote Nick Cawley, markets analyst at Daily FX. “If BTC can close above this triangle over the next few sessions, it will indicate renewed bullish sentiment that could push the price back to the 200-day moving average and the spike high between $7,200 and $7,300.”

The 200-day moving average, which currently sits at $7,210, is a key momentum indicator and has proved a thorn in the side for bitcoin bulls having tested, but failed to breach, on four occasions in 2018.

Read: How Bitfinex, Tether are raising eyebrows in the cryptocurrency market


is unchanged at $6,425. The Cboe October contract will expire and cash settle Wednesday afternoon.

Read: This is where cryptocurrencies are actually making a difference in the world

Did The Wolves Or Sixers Get The Better End Of The Trade?

Week ahead in business and finance

Remington Files For Chapter 11 Bankruptcy Amid Mounting Pressure For More...