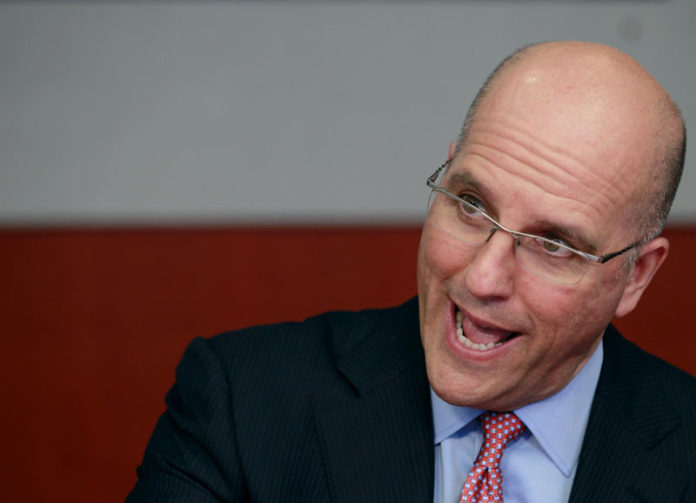 “I really don’t think there is a bear market on the horizon,” Bernstein, the chief executive of Richard Bernstein Advisors LLC and former Merrill Lynch & Co chief investment strategist, said at the Reuters Global Investment 2019 Outlook Summit in New York.

Bernstein said there is now an absence of typical catalysts for a “multi-quarter, curl-your-toes” bear market including falling corporate profits, an inverted U.S. Treasury yield curve, and overly bullish investors.

Indeed, he said complacency is missing.

“People are so focused on downside and downside protection,” said Bernstein, whose firm oversees $9.5 billion of assets as of Sept. 30. “That’s not what a recession feels like.”

Bernstein said he is “very cyclically positioned,” favoring industrials, commodities, gold and other investments that can thrive in a rising “pro-inflation” environment, while keeping a “very, very short duration” in fixed-income investments.

“Fundamentals have been deteriorating in the fixed-income market for two years. Nobody cares. It’s an amazing thing to see,” he said. “If you think about what’s the kryptonite of fixed income, it’s inflation. (It) has been creeping up at a snail’s pace, but it’s creeping up.”

A key cause of uncertainty about growth prospects comes from Washington, Bernstein said, as lawmakers eyeing the two-year election cycle enact voter-friendly stimulus but resist the hard choices to address a longer-term need, infrastructure spending.

He said that shortcoming is already impeding productivity, pointing to the daily slog that he and thousands more commuters experience on a much-maligned suburban railroad to New York from New Jersey.

“I have the pleasure of riding New Jersey Transit every day,” he said. “I only go through a 108-year-old tunnel. I don’t get to go over the 110-year-old bridge.”

Bernstein sees no “day of reckoning” for the economy, but said a “slow bleed” from deficit spending has created a “huge asset-liability mismatch” where the cost of paying interest on the national debt could soon outpace Medicaid and defense spending.

Bernstein said last week’s Democratic takeover of the U.S. House of Representatives likely will have no effect.

“We’re in a late-cycle environment, we’re stretching the limits of the economy, and public policy is the most uniformly pro-inflation,” he said. “I don’t think people realize that.”

Kate Middleton Was Angry With Prince William When He Did This, Source Claims

China agrees to ‘reduce and remove’ tariffs on US cars, says Donald Trump