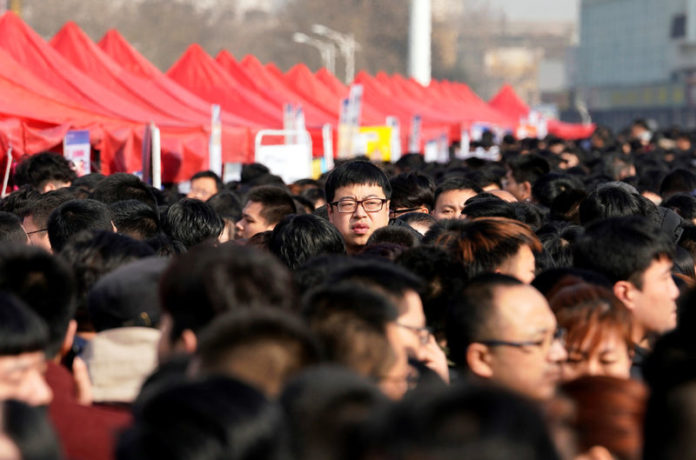 BEIJING (Reuters) – China’s state council, the cabinet, on Wednesday said that the government will offer financial help to struggling companies that keep staff on payrolls in a time of increasing economic headwinds.

For firms that choose not to cut staff or reduce the number of job cuts they are planning next year, the government will return half of their unemployment insurance fees, the state council said in a statement on its website.

The government also urged the country to pay “high attention” to the impact on employment from increasing economic downward pressure.

In early November, China flagged that it would take “targeted” steps to promote employment, but it did not specify measures would be tied to job retention.

Both official and private factory surveys have pointed to a prolonged period of job cutting in manufacturing, and Beijing is keen to keep employment stable as the trade war with the United States has meant uncertainty for factory workers’ job prospects.

The newly-created national guarantee fund will offer guarantee for small businesses when it comes to securing bank loans, the government said, in a bid to guide more financial resources to support job creation.

Analysts say Chinese companies face some of heaviest tax burdens in the world when social insurance contributions are included.

China’s surveyed jobless rate in June was unchanged from May at 4.8 percent, official data showed.

Many analysts say, however, that the government figure is an unreliable indicator of national employment conditions as it measures only employment in urban areas and doesn’t take into account millions of migrant workers.

China’s economic growth “could well fall toward 6 percent (if not lower) in 1Q 2019,” economists at DBS said in a note to clients this week, adding that Chinese policymakers will most likely counter this growth trajectory with further stimulus measures.

This Wall Street guru was outsmarted by his own childhood stock...

City boss on board of conservation charity pictured with slaughtered animals...