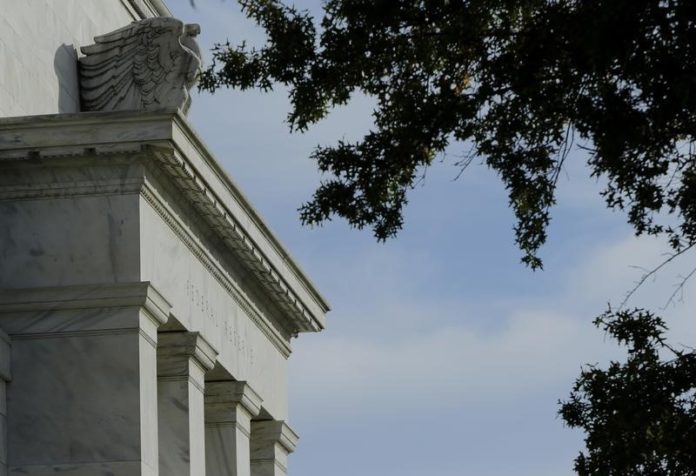 WASHINGTON (Reuters) – Tensions over trade, the turbulent Brexit discussions, and trouble in China and emerging markets could rock a U.S. financial system where asset prices are “elevated” and business credit quality may be “deteriorating,” the U.S. Federal Reserve said in a first-ever report devoted to financial stability.

The report noted several signs of resilience in the financial system to the sorts of unexpected shocks that might arise, including the strong capital position of banks, generally tempered borrowing by households, and a system less vulnerable to the sorts of runs or credit crunches that nearly shut down the global economy in the 2007 to 2009 financial crisis.

But the report highlighted stock prices that are high by some measures, commercial real estates values “growing faster than rents,” and the willingness of lenders to fund risky corporate loans.

“Business sector debt relative to (gross domestic product) is historically high and there are signs of deteriorating credit standards,” the Fed report stated.

Should any of a number of outside shocks occur, such as an escalating trade war between the U.S. and major trading partners, a messy breakup between Britain and the European Union, or a crisis in emerging markets, “the resulting drop in asset prices might be particularly large, given that valuations appear elevated relative to historical levels.”

The report even highlighted the Fed’s own policy decisions as a risk, saying that markets globally needed to adjust to the fact of rising interest rates, and “some adjustments could occur abruptly.”

The report is the first of what the Fed intends as a twice yearly review of risks to financial stability, defined as the degree to which the financial system can continue to lend to businesses and households even when subjected to an outside shock.

The Fed has included its views on financial stability in other documents and presentations, including the central bank’s semiannual report to Congress on broad economic conditions.

But giving financial stability a marquee publication of its own shows the importance the issue has taken on as Fed officials strive to avoid the mistakes that led to the 2007 financial crisis. Powell in a recent public appearance said policymakers had suffered “a failure of imagination” back then regarding how central financial stability was to the economy overall. The report aims to put on public display twice a year what the central bank is watching and how those parts of the market are behaving.

It is also part of Powell’s drive for the Fed to talk more openly and frequently with markets and the public. That effort was begun and expanded upon by former Fed chairs, but Powell has said he wants to carry it further to keep public faith in the central bank’s use of its broad powers — and help guarantee the Fed’s continued independence from elected officials in setting monetary policy.

In separate reports on Wednesday president Donald Trump renewed his criticism of Powell, and Treasury Secretary Steve Mnuchin was reported to have inquired among bond investors what they thought of Fed policy.

Federal Reserve officials said they specifically did not draw a staff conclusion about the overall state of financial stability, leaving that up to policymakers. But they compared the situation today, when leverage is low among households and banks, to the pre-crisis situation where much of the U.S. had overborrowed.

UK PM May must go now, says lawmaker in her Conservative Party By Reuters