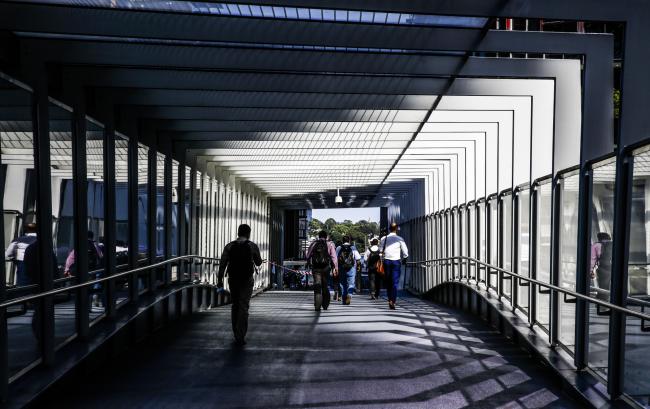 © Bloomberg. People walk through the Barangaroo area in the central business district of Sydney, Australia, on Monday, Jan. 23, 2017. Australia is leading a push to salvage a Pacific trade deal after U.S. President Donald Trump formally withdrew as a signatory to the 12-nation accord. Photographer: DALLAS KILPONEN/Bloomberg

(Bloomberg) — Australia kept interest rates at a record low as a decline in the jobless rate — now at a level that usually implies full employment — failed to shift the inflation needle.

Reserve Bank Governor Philip Lowe left the cash rate at 1.5 percent Tuesday, as he has since taking the helm more than two years ago, arguing that strong economic growth and hiring will eventually prompt employers to offer higher wages to attract workers. That should finally break the low inflation cycle.

But the central bank’s ideal scenario is under threat from falling property prices, which in Sydney are down almost 10 percent from July last year. That could prompt households to cut back spending and instead boost their savings in an environment of stagnant incomes. On the flip side, the currency’s 11 percent decline from its January peak provides some stimulus.

“The forecasts for economic growth in 2018 and 2019 have been revised up a little,” Lowe said in his statement accompanying the policy decision. “The central scenario is for GDP growth to average around 3.5 percent over these two years, before slowing in 2020 due to slower growth in exports of resources.”

From a distance, the economy’s numbers are impressive: unemployment has fallen to 5 percent and growth jumped to 3.4 percent; yet inflation has hovered below or near the bottom of the central bank’s 2-3 percent target. Based on the U.S. experience, the jobless rate probably has to fall further to drive up wages.

Lowe signaled the RBA expects unemployment to keep heading lower. “The outlook for the labor market remains positive,” he said. “With the economy growing above trend, a further reduction in the unemployment rate is expected to around 4.75 percent in 2020.”

The cooling of the housing market — after a five-year boom that pushed household debt to a record 190.5 percent of income — is fortuitously timed given growth and hiring are strong. But the central bank has also historically refrained from raising rates when Sydney prices are falling.

In addition, the U.S.-China trade conflict poses a challenge for the economy Down Under, given it’s the most China-dependent in the developed world. Moreover, an election is due in Australia by May, and polls show the less-business friendly Labor party is on track for victory.

As a result, traders are pricing in little chance of a rate hike in the next year.

How to create your own WhatsApp stickers?