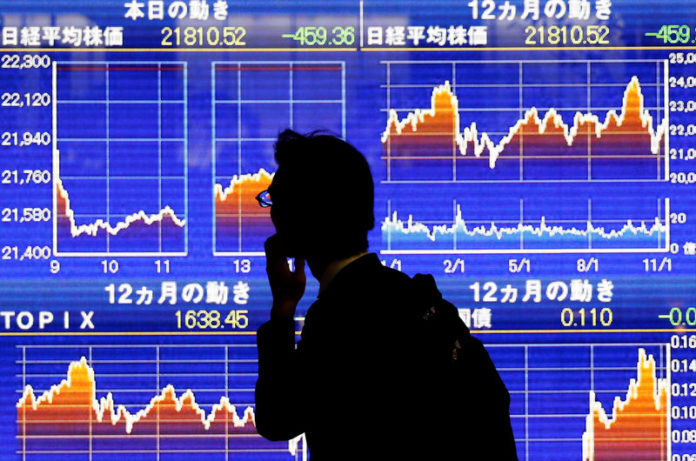 © Reuters. A man looks at an electronic stock quotation board showing Japan’s Nikkei average outside a brokerage in Tokyo

(Reuters) – Shares of cash-rich firms in Asia have weathered this year’s sell-off in much better shape than key stock indexes, a Reuters analysis showed, reinforcing views that investments in companies with strong finances safeguard returns during market crises.

An analysis of top 200 Asian firms based on their cash and short-term investments showed they outperformed the broader MSCI Asia-ex-Japan index () during the market crashes in 2008, 2013 and 2015.

So far in 2018, their shares have fallen just 5 percent on average, compared with the MSCI Asia-ex-Japan index’s fall of 14.5 percent.

“In times like this, I think the focus of investors moves from the profit and loss account toward the balance sheet….If you are an investor and you are looking for safety in markets, ultimately the one metric that does not change despite market volatility is the absolute cash balances of companies,” said Jim McCafferty, head of Asia-ex-Japan equity research at Nomura.

He said South Korea, China and Japan appear to be the safer markets in terms of cash balances in Asia.

Traditionally, Asian companies prefer to sit on huge cash piles, keeping them idle, but recently the culture has started to change due to government’s efforts and corporate governance reforms to enhance shareholder returns.

A Reuters analysis of Asian companies with market capitalization of at least $1 billion showed their total dividends rose to $203.9 billion in the first three quarters of this year, the highest in at least 10 years.

Refinitiv data showed Asian firms have announced $10 billion worth of share buybacks so far this year, the highest since 2012.

“We may see some of those improvements in the return on equity (through dividends and share buybacks) that we have seen in the U.S equity market in the last 5 years,” said Paul Kitney, chief equity strategist at Daiwa Securities in Hong Kong.

“In Japan, we have seen efforts over recent years, promoting corporate governance, including increasing share buybacks, dividends through government policies.”

Some companies are also expected to cut their expansion plans due to slowing global demand and divert their cash to improve shareholder returns.

“Given the uncertainty arising from U.S-China trade tensions, we have observed that corporates in Asia are deferring or are more cautious on capital expenditure,” said Colin Ng, Head of Asia (ex-Japan) Equities at UOB Asset Management.

Refinitiv data showed Asia’s companies’ capex growth is expected to fall 2 percent in the next 12 months, at the same time dividends are to grow by 6.5 percent.

People aren’t giving up their day jobs for Uber

How do I cancel 10 credit cards without damaging my credit score?

Defaulters, beware! Your bank can now stop you from flying abroad