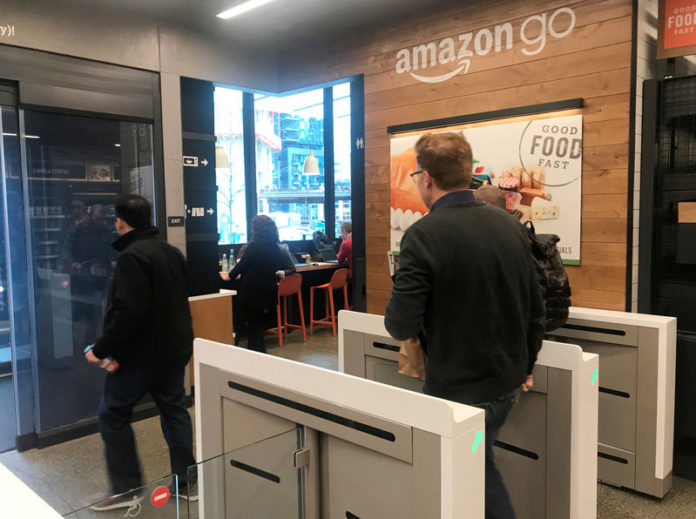 2/2
© Reuters. FILE PHOTO: A customer walks out of the Amazon Go store, without needing to pay at a cash register due to cameras, sensors and other technology that track goods that shoppers remove from shelves and bill them automatically after they leave, in Seattle

(Reuters) – Amazon.com Inc (O:) is looking at bringing its futuristic checkout-free store format to airports in an effort to win business from hungry, time-pressed travelers, according to public records and a person familiar with the strategy.

The move underscores how a company that started as an online bookseller is making forays into brick-and-mortar retail to capture a greater share of shoppers’ spending.

For months, the world’s largest online retailer has been expanding Amazon Go, where customers scan their smartphones at a turnstile to enter, and then cameras identify what they take from the shelves. When shoppers are finished, they simply leave the store and Amazon bills their credit cards on file.

Amazon has opened seven of the stores to the public since January: in Chicago, San Francisco and its hometown Seattle, mostly catering to workers in nearby offices looking for a quick lunch.

“The lead for Amazon Go requested a meeting,” read a June 27 email from a technology adviser who supports Los Angeles International, the second-busiest airport in the country, to a concessions official. “Interested?”

“Yes. Thanks!” the concessions official replied.

A few hundred miles north, in the heart of Silicon Valley, an account manager at Amazon’s cloud unit asked San Jose International Airport for a meeting and referenced Amazon Go, as “one of many possibilities we can discuss.”

After the June meeting took place, during which Amazon discussed how the stores work, an airport information technology manager wrote: “I am looking forward to moving forward with the Amazon Go technology at the airport.”

Officials from both airports have since told Reuters they had no further correspondence about Amazon Go and that the retailer would have to undergo a competitive bid process to become a concessionaire, as is typical. The company’s cloud unit, Amazon Web Services, has been in touch with airports for other purposes. The status of the Amazon Go effort is unclear.

A person familiar with the strategy confirmed that Amazon is studying how to get the checkout-free stores into airports and that an employee with experience in business development was assigned to the task.

“Think about how you can expose your brand,” the person familiar with the matter said, on condition of anonymity. “You’ll be able to build broad awareness just being in a dozen of the best airports.”

More than 350 million passengers boarded flights at the country’s top 12 airports last year, according to U.S. Department of Transportation data.

Operating in airports will present new challenges for Amazon Go.

Workers must gain clearances to staff concessions after security checkpoints, and square footage in busy sections of an airport can be expensive to lease. What is more, many airports are publicly run and require would-be concessionaires to put in public bids for retail space.

If “you do a deal, it’s almost like they go back out and shop it,” said Kazuko Morgan, vice chairman at real estate services firm Cushman & Wakefield. She was not speaking with reference to Amazon.

“Not only do your terms become public knowledge, someone can come in at the last hour and block you,” she said.

That has not stopped airports from trying to court the online retailer. In September, a concessions manager for Dallas Fort Worth International Airport emailed the vice president in charge of Amazon Go, asking for a partnership “on the first Airport Amazon Go location.”

The airport did not immediately comment on whether the concessions manager got a response.

This chart shows the dramatic demise of a market flagged by...