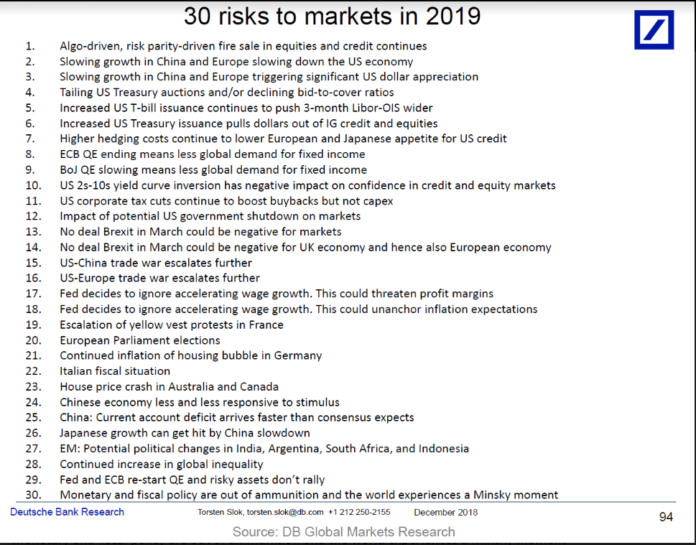 In a research note published Friday, Sløk named “30 risks to markets in 2019,” with “algo-driven, risk parity-driven fire sale in equities topping the list.

Sløk told MarketWatch that the catalog isn’t ranked in order of the severity of the risks, but those at the top are more of more immediate concern, and are those that Sløk’s clients have consulted with him often about.

“I have a Ph.D. in economics. I am the chief economist at Deustche Bank Securities, and I spend all day thinking about the explanations of why the stock market goes up and down,” he said. “Usually there’s a good explanation, be it from earnings revisions, new economic data or surveys of sentiment”

“The very unique thing about markets since October is that we have on all three fronts seen little change whatsoever,” he said. “If you look at all these data, it is just really strong, and it can’t justify the decline we’ve seen in the stock market.”

“If you can’t explain why the market is moving, you should be suspicious of the moves the market makes,” Sløk said, adding that the rise of algorithmic trading and rules-based investment strategies like risk-parity investment funds can likely take the blame for the outsized moves in the market we’ve seen in recent weeks.

These strategies, he argues, are causing momentum to be the most important force in markets. Investors, or their computers, “are selling because stocks are falling, not because of changes to the fundamentals,” he said.

Beyond the risks posed by algorithmic trading, the theme that ties many of the risks together on the list, Sløk said, is the difficulty investors are having quantifying them. The slowdown of the Chinese economy is one example, as are rising trade tensions between the U.S. and China. In both of these situations, investors have little history to turn to help them understand how these forces will act upon equity markets.

The nature of the challenges facing the market, therefore, is itself a type of risk, as their unquantifiability discourages investors from buying risk assets, because they don’t know how to hedge them. “We’re in an unusually difficult situation,” Sløk said. “The fact that there are so many topics on this list, and that they are so diverse, tells you something important about the market.”

Huawei to spend $2 billion over five years in cybersecurity push