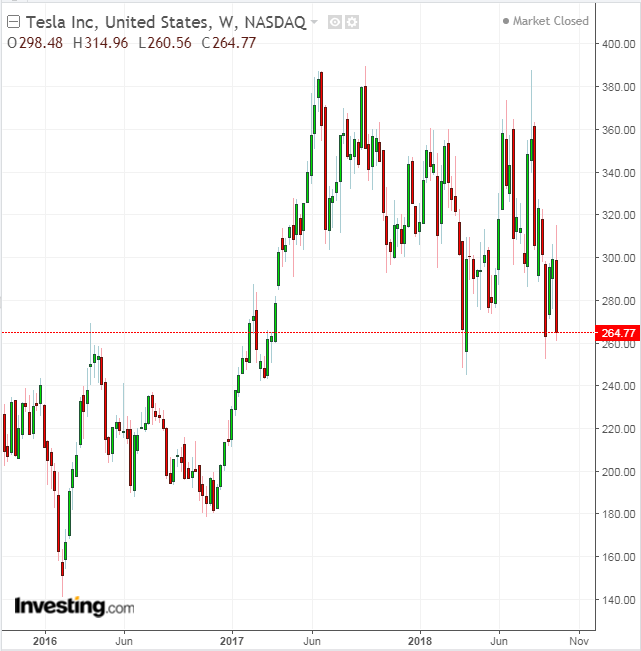 One way or another, Elon Musk’s war with short-sellers could be nearing some sort of conclusion. Tesla (NASDAQ: NASDAQ:) shares have been tumbling for some time now, and Wall Street analysts see an uncertain future for the electric car maker, even after last week’s lawsuit by the US Securities and Exchange Commission (SEC) was settled on Saturday.

The SEC’s regulatory action wasn’t surprising. It was fueled by Musk’s erratic and often juvenile interaction with the public via his Twitter handle. Though that’s been going on for some time now, Musk pushed regulators to the limit when he declared in early August that he had “funding secured” to take Tesla private by buying out the stock at $420 a share.

The news triggered a short-lived rally for the automaker’s stock, pushing shares 13% higher after the tweet. But the stock plunged once the company released a statement confirming the news about going private, but with no mention of financing. Tesla later abandoned the go-private plan altogether.

In the lawsuit it filed in federal court in New York, the SEC accused Musk of committing fraud by making false public statements with the potential to hurt investors. The suit sought to bar Musk, the co-founder, CEO and chairman of Tesla, from serving as an executive or director of publicly traded companies. Such a punishment is one of the most serious the SEC can impose against a corporate executive.

On Saturday, Musk reached a settlement with the SEC. Though he will remain CEO of Tesla, he’s required to step aside as chairman for three years. In addition, Musk personally, as well as the company, are each required to pay fines of $20 million.

Tesla shares plunged 14% on Friday, when initial reports said that Musk intended to fight the suit. The fall was the most since November 2103 and wiped out $7.3 billion of the company’s market value.

Even with the settlement, investors should be contemplating what Musk’s diminished role in the company he co-founded 15 years ago might mean for Tesla, which was started in order to revolutionize the transportation industry. Of equal concern will be whether his odd behavior will continue.

Since the company’s inception, Musk has been Tesla’s brand evangelist and one of the key drivers of the corporate vision. Under his tutelage, Tesla became the most valuable car producer in the US, leaving behind industry giants such as General Motors (NYSE:) and Ford (NYSE:), as investors believed in his vision despite the company’s major challenges in meeting its car production targets.

After this current fiasco, Tesla shares are in uncharted territory. Even with the weekend settlement, we believe the risks still far exceed the rewards.

Settlement of the suit might produce a relief rally in Tesla shares as the key, immediate risk is reduced and market focus shifts back to Tesla’s business. Still, betting on a tranquil, longer-term outcome for the stock is too risky when the CEO in question is Musk. Remember that he smoked marijuana on a podcast last month and called a cave diver who rescued trapped children in Thailand a pedophile in one his tweets.

Considering all the drama and mystery surrounding Musk, even with the SEC’s lawsuit in the rearview mirror, it’s hard to call a bottom for Tesla stock. Filtering out Musk’s erratic behavior from the bigger picture doesn’t necessarily help either. With its production problems and current cash-burn rate, it’s still unclear how long it will take Tesla to emerge as a profit-making concern.

Tesla has $1.3 billion in debt coming due in the next 12 months. At the same time it has just $1.3 billion of cash in the bank after backing out $942 million of customer deposits it holds on car orders. It’s our view that right now Tesla is simply too big a gamble for serious investors.

Stocks that could add sparkle to your portfolio in Samvat 2075

Check out! Bank employees to go on nation-wide strike on December 26; here’s reason