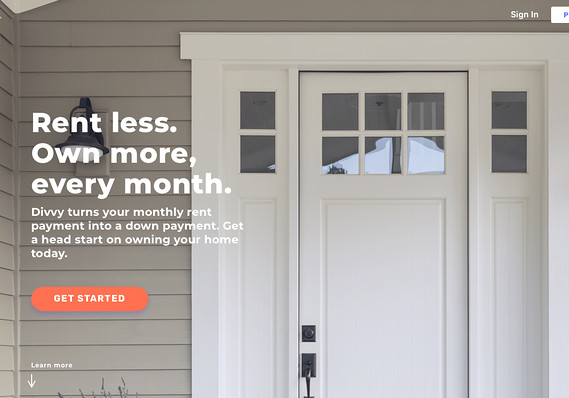 San Francisco-based Divvy, which on Tuesday announced a $30 million funding round from famed venture capitalists Andreessen Horowitz, calls itself a “fractional homeownership company.”

To many housing advocates, it looks like the familiar “rent-to-own” model that has stumbled before, either by ensnaring consumers in clearly predatory schemes, or by failing to make work for anyone what’s often described a “win-win.” Still, Divvy and its backers believe new technology, and lessons learned from the aftermath of the housing crisis, will help it succeed where others have failed.

Divvy, which launched earlier this year, allows qualified customers to select any home that’s for sale on the open market, as long as it’s in reasonable shape and meets the right pricing profile. If customers meet certain criteria – including having a minimum credit score of 550 and being employed for the last 12 months – they’ll likely qualify to participate.

Divvy will buy the home for the customer, and allow that customer to lease it for up to three years. Every month, the tenant will make a monthly payment that Divvy’s underwriting models determine the customer can “comfortably afford.” About 70% of that monthly payment is rent, about 5% are maintenance funds, and the rest is what it calls “equity credits” – monies held in escrow and which will belong to the tenant, whether or not he eventually becomes the owner of the home.

Divvy has helped close to 100 customers so far, co-founder and CEO Brian Ma told MarketWatch, and is fielding nearly 2,000 applications a month. Right now it’s up and running in Cleveland, Atlanta, and Memphis, but is evaluating additional markets.

The company’s approach is designed to respond to pain points that have tripped up previous rent-to-own attempts. Divvy uses big data to work only with customers “who have a high likelihood of conversion” from renter to owner, in Ma’s words.

“We make more money if you convert,” Ma said. “We want to treat people like co-owners.”

While that sounds like a worthy goal, it makes consumer advocates wince.

“These hybrid options where you’re renting to own or where it’s implied that you have a path to ownership carry a lot of risk and come with a lot of potential problems,” said Sarah Mancini, an attorney who splits her time between the National Consumer Law Center and an Atlanta-based legal aid organization.

That may include having to pay a lot of money out of pocket, Mancini said. “They make a tenant take on additional expenses with the expectation that they’re going to become owners. While you’re in the lease period, you are responsible for taking care of the house. That’s not legal in most states. When you’re in a lease, the landlord has the obligation to make the repairs.”

Any of the accrued Divvy maintenance funds that a customer doesn’t use are returned at the end of the three-year tenancy, Mancini acknowledged, but she thinks it’s still hard to determine whether any given household would be better off pursuing Divvy’s model or renting, allowing a landlord to worry about repairs, and saving a certain amount each month toward a traditional home purchase.

For its part, Divvy says it has dozens of happy customers, and it’s learning as it goes. It hit an early high-profile stumble, when an Atlanta tenant’s home turned out to have major structural problems requiring thousands of dollars of repairs. That tenant also turned out to be a local progressive media journalist with a particular interest in housing issues. The case started out in court, but then Divvy “ended up paying for all of it. It worked out great – we still talk,” Ma said.

For Ma, who was an early Zillow employee, that incident exemplifies what he thinks Divvy brings to the housing market. “Homeownership is incredibly emotional, it was a lot of work on both of our ends. It’s much easier when a company does this at scale than when a family does.”

Andreessen Horowitz partner Alex Rampell agrees. Rampell sees Divvy as the antidote to the massive Wall Street investors that scooped up thousands of houses in the aftermath of the financial crisis and became landlords on an institutional scale.


converted owner-occupied housing stock into renter-occupied, Rampell noted. He believes Divvy can reverse that trend, leaving tenants not just on the path to homeownership, but also having accrued some equity.

“This exact thing has been tried by people who I deeply respect and have deep roots in housing,” said Julia Gordon, executive vice president of the National Community Stabilization Trust. One recent example is Home Partners of America, a Chicago-based rent-to-own company initially funded by housing securitization pioneer Lew Ranieri. Home Partners did not respond to multiple requests for comment.

Gordon and other advocates believe that anyone interested in a program like Divvy’s is either ready – and “could get into ownership now” if they worked with a housing counselor – or not. While Divvy’s model differs vastly from previous predatory programs that would do nothing for those in the latter category, it’s still unclear what will happen at the end of the three-year tenancy period.

It’s also not clear what will happen if home prices decline, or if a home doesn’t appraise for the amount Divvy and the tenant were counting on at the end of the rental period.

Divvy’s Ma says in response that the company wants to have “a long-term relationship” with its customers, and will make every effort to make the conversion process work for them.

Also read: When the rent isn’t too high — but the security deposit is

“There’s still this disconnect between homes available for purchase and available mortgage credit,” Mancini said. “We haven’t solved that problem and people are still taking advantage of that. Most of the financial models that have been developed have been extremely predatory. This one seems less problematic. There’s potential for upside for most parties but there’s also potential that most of the profit would go to the investors. I’m just not sure that being in this contract makes it any more likely that you’d be a homeowner in three years.”

Divvy – and its high-profile investors – believe it’s worth a shot.

“We feel co-ownership is here to stay,” Ma said. “We fundamentally believe that rent to own was a good idea but executed poorly. We want to be the modern rent to own.”

Jet Airways defers wet lease of its ATRs to TruJet