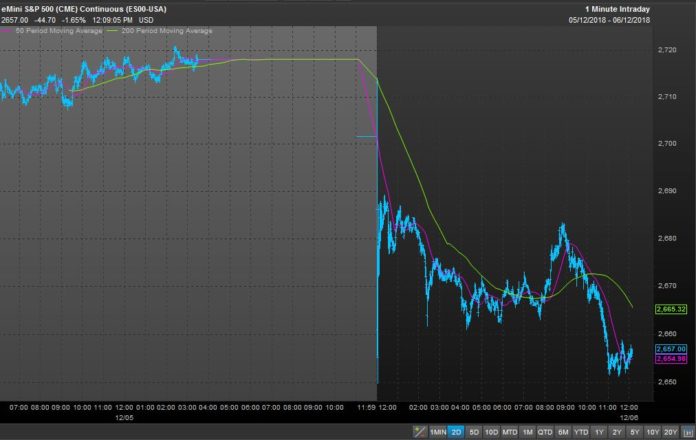 Stock-market bulls are definitely not catching any breaks these days, and Thursday isn’t looking like the exception.

Thus far, the market isn’t sanguine about the chances for further progress on trade relations between the U.S. and China, after the arrest of Huawei’s CFO Meng Wanzhou. Indeed, carnage in global equity markets is already on display.

Combine that narrative with an OPEC production gathering that has the market on a knife’s edge, and the recipe for more pain seems fairly baked in as traders return from a day off to mourn the 41st U.S. President George H.W. Bush.

That detention of a high-profile tech executive in China is being credited, at least in part, for some crazy action for S&P 500 futures as electronic trade restarted in the wee hours of Thursday. As this chart shows, those futures plummeted so viciously at the open that the CME had to step in and stop trading for a period, just to cool things off:

That leads us to our call of the day from trader Greg McKenna, who runs McKenna Macro. He says while the jury’s still out on whether a so-called fat finger, or accidental trade, caused that big spike down, or it was something else, it’s a warning shot for investors.

“This is a very dangerous set up. I’m not Chicken Little, but we need to see a base build up or prices will slip,” he said in emailed comments. “Market collapses happen from weakness so we need to get through Thursday trade in the U.S. to give folks more confidence again.”

As for retail investors, probably a bit frazzled by now given what the week has thrown at them so far, his advice is to “stay in the time frame that they trade. Investors invest, and traders trade. Don’t get caught outside those parameters.”

McKenna says cash is a “reasonable alternative” right now, for those who are a bit unnerved right now. He says the levels to watch are 2,600 for the S&P 500 and above 2.8% for the yield on the 10-year Treasury note. In addition to trade worries, investors have been focused on a narrowing of the yield spread between the 2-year and 10-year government bonds to the tightest gap in about 11 years has many fretting about a potential recession.

While some are fretting about that outsize move overnight, others are taking a glass half-full view.

“Personally I think everyone looking at this the wrong way. the circuit breaker worked and limited the damage. Everyone missing that point that an algos-gone-rogue was prevented by CME systems from causing further unnecessary losses,” said Chris Weston, head of research in Pepperstone, in emailed comments.

“So many are worried about a world with algos causing distortions but in the case we can sleep slightly better at night — the system won,” said Weston.


futures are deep in the red. That’s after Tuesday’s bloodbath wiped 800 points off the Dow


Read: Here’s one theory to explain the stock market’s plunge on Tuesday


is also in the red, and it was no better in Asia, which saw widespread losses, led by Hong Kong


has taken a big hit as the market grapples with the Vienna OPEC meeting where there’s some confusion over a potential production cut. The dollar


is flat and gold


is easier. The yield on the 10-year Treasury note

Read: Brace for a 15% plunge in S&P 500 next year if the Treasury yield curve fully inverts

Check out the Market Snapshot column for the latest action.

Huawei’s CFO was detained on Saturday, but news seemed to get around slowly and take the market by surprise in Asia Thursday. Arrests don’t get more high-profile than Meng—the daughter of the Chinese telecommunications giant’s founder and potential successor. The Chinese are furious, with the embassy in Canada demanding her release, while the company says she’s innocent. One security expert says U.S. tech executives should avoid traveling to China until this all cools off.

The other big spotlight Thursday is on Vienna, where markets are waiting to see if OPEC will green light a production cut to help support struggling oil prices. Crude is tearing lower amid some worries Saudi Arabia won’t push for a big enough cut.


has “too many adversaries,” said Stifel Nicolaus, which cut the company to hold from buy on Wednesday. Facebook is among the techs getting hit pretty hard Thursday.


are reporting ahead of the open, with Lululemon


after the close. Earnings released late Tuesday and Wednesday may grab attention, after Brown-Forman’s


is among the losers after the CEO of its biggest client, Lion Air, said it may cancel a huge order after the airline group appeared to blame his company for a deadly crash in October.

Read: Wages may spike higher in November jobs report and Wall Street won’t like it

6 million—That’s how many Brits are using smart devices to snoop on loved ones, says a new survey from Direct Line Insurance. The survey showed nearly 4 million parents (13%) are already watching their offspring and eight million say they intend to do so. One in five surveyed said they’d happily spy on their cleaner or babysitter.

CO2 levels hit an all-time in 2018, thanks largely to coal use in China

Cheap and simple test reveals if you any cancer cells anywhere

Need to Know starts early and is updated until the opening bell, but sign up here to get it delivered once to your email box. Be sure to check the Need to Know item. The emailed version will be sent out at about 7:30 a.m. Eastern.

China’s Huawei says it has secured over 25 commercial 5G contracts...

This Russian company just got a $1 billion deal to supply...

UK short-run inflation expectations edge up to 2.7 percent: Citi/YouGov By...