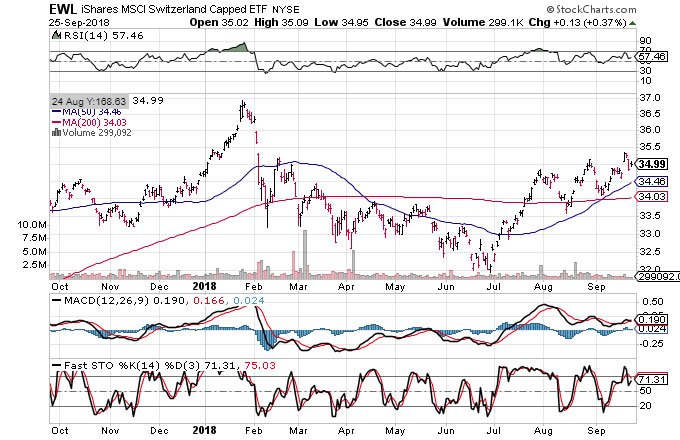 As talks of trade war and other geopolitical factors have dominated headlines over the past several months, it has been natural for most U.S. investors to focus their efforts on allocating capital domestically. However, as volatility has started to wane in recent months, we’ve noticed that the appetite for risk is increasing, and it is becoming more popular again for investors to look beyond America’s borders.

Let’s take a look at the charts of three international exchange-traded funds (ETFs) that could be worth a closer look as we head into the final quarter of 2018. (For a quick refresher, see: Invest In International Markets With These 3 ETFs.)

Despite the recent news that Swiss-based Novartis AG (NVS) is laying off 2,000 employees, Switzerland is continuing its role as a hotbed for foreign investment, and on the chart of the iShares MSCI Switzerland Capped ETF (EWL), the price has recently been able to close above the long-term resistance of its 200-day moving average. The break higher has triggered a bullish crossover between the 50-day and 200-day moving averages, which is known to many active traders as the golden crossover and is traditionally used for marking the beginning of a long-term uptrend. Based on the pattern, traders will likely set their target prices near the 2018 high of $36.92 and protect their positions by placing stop-loss orders below $34.03 in case of a sudden shift in fundamentals, which has been known to happen in that part of Europe. (For related reading, check out: These International ETFs Are Trouncing the Competition.)

Talk of trade war over the past several months has put the focus on countries such as Mexico and indirectly highlighted many of the country’s strengths and the reasons that it is a favorite spot for many investors to allocate capital. Taking a look at the chart of the iShares MSCI Mexico Capped ETF (EWW),  the surge in buying pressure has sent the price above the 200-day moving average and has also triggered a golden crossover between the long-term moving averages. Based on this chart, we’d expect active traders to hold a bullish outlook on the Mexican financial markets, and most will likely protect themselves from a move to the downside by placing stops below $49.53. (For more, see: The Best 4 Places to Invest in Latin America.) 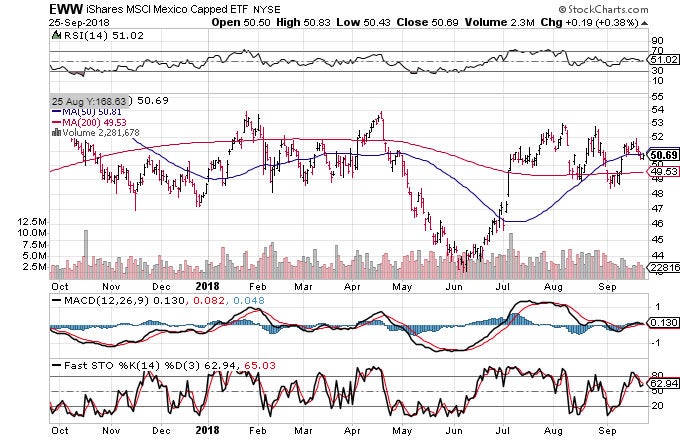 Taiwan is another country that could be worth a closer look over the coming months, and the period of consolidation that has dominated the trend over the past several months appears to be coming to an end. Taking a look at the chart of the iShares MSCI Taiwan ETF (EWT), the recent close above the 200-day moving average and simultaneous crossover between the 50-day and 200-day moving averages is a technical sign that the bulls are in control of the momentum. At this point, traders will likely place tight stop losses in case of a sudden sell-off and try to capture one of the best risk-to-reward scenarios of the year. (For related reading, check out: Active Traders Focus Attention on Emerging Markets.) 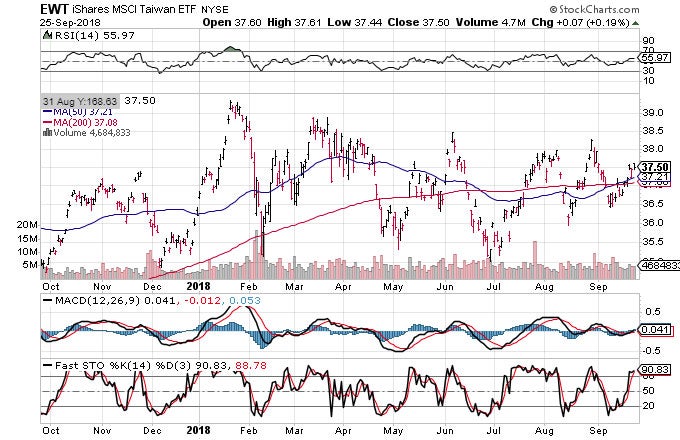 The focus for many investors has been strictly on U.S. and Canadian equities for much of 2018, but the recent decline in volatility has started to suggest that capital could start to get allocated to regions with higher expected returns. Countries of specific interest to traders over the coming months will likely include Switzerland, Mexico and Taiwan. (For more, see: 5 Emerging Market Equity ETFs to Watch in 2018.)

Charts courtesy of StockCharts.com. At the time of writing, Casey Murphy did not own a position in any of the funds mentioned.

How to create a healthcare safety net for retirement By Reuters

Video: Why the Betterment CEO only reads his email once a...