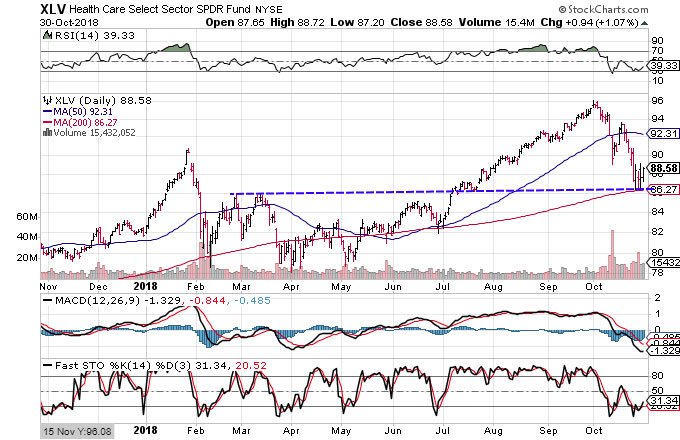 Investing in the healthcare sector is often regarded as a hedge from regular market forces due to the underlying nature of the work. Care in the form of providers, equipment, medicine and services is linked to increasing demand due to an aging population. In the paragraphs below, we’ll take a look at three specific charts that are pointing to higher prices and suggesting that now could be the ideal time to increase exposure to the broader healthcare sector.

Investors looking for an ETF to track the performance of the healthcare sector generally turn to the Health Care Select Sector SPDR Fund. With a total of 63 holdings from across the sector and its sizable total net assets of nearly $18 billion, there are few funds available that offer the same scale and liquidity. Taking a look at the chart, you’ll see that the price has recently drifted toward the combined support of a horizontal trendline and its 200-day moving average (red line). These influential technical levels of support will likely be looked to as guides for those looking for where to place buy and stop orders. More specifically, followers of technical analysis will likely look to add a position as close to current levels as possible in hopes of  major bounce while also placing a stop loss below $86.27 to limit the downside risk.

From the perspective of size and breadth of products, there are few players in the healthcare sector that are able to compete against Johnson & Johnson. Taking a look at the chart below, you can see that the price is trading near the extremely influential support of a horizontal trendline and how it provided profitable entry positions for those anticipating a bounce. Active traders will expect this behavior to continue in the future, and many have likely used the trendlines as a guide for adding to their positions over the past week. Furthermore, Tuesday’s close above the confined range suggests that the bulls are in control of the momentum and that prices could be gearing up for a move toward the January highs near $145. 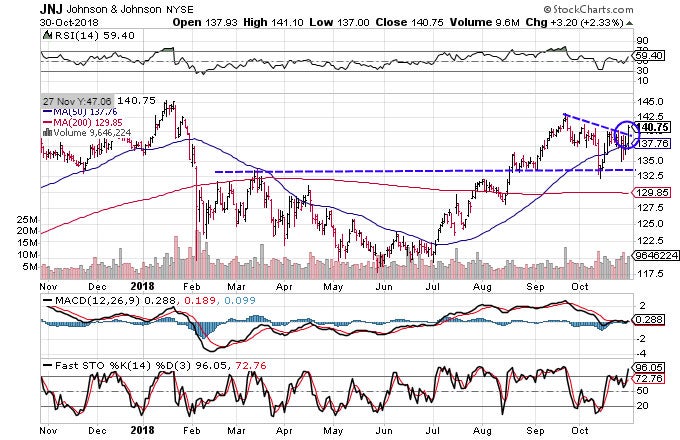 Within the healthcare sector, there are few companies that are trading within a more clearly defined uptrend than UnitedHealth Group. The ascending trendline shows that the bulls are in dominant control of the momentum and that each move toward the support level has provided a lucrative buying opportunity for those willing to take on the risk. Lucrative risk-to-reward ratios suggest that buy orders will be placed near current levels and that stop losses will be placed below $245.02 in case of continued selling pressure. 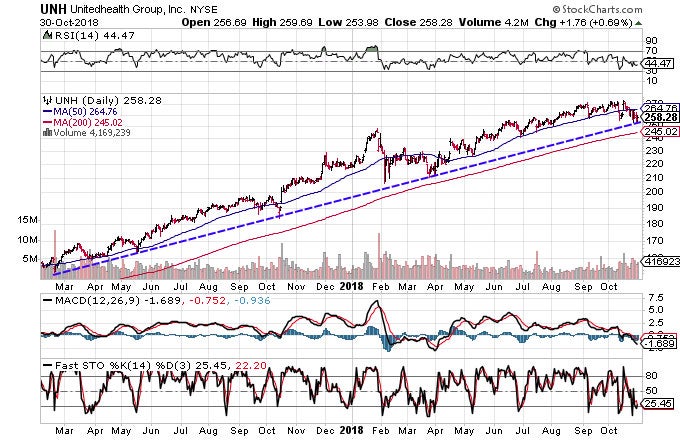 The healthcare sector is generally one of the most sheltered segments of the economy due to the underlying nature of the business. Increasing demand due to underlying trends in demographics make this a favorite among traders, and given the move toward key long-term levels of support, it appears as though now could be the ideal time to buy.

Charts courtesy of StockCharts.com. At the time of writing, Casey Murphy did not own a position in any of the assets mentioned.

WPI inflation in October rises to 4-month high of 5.28%; key things to know

Portugal stocks higher at close of trade; PSI 20 up 0.11% By Investing.com

U.S. retail sales are soft for the second month in a...

RBI seeks time till November 26 to respond to CIC’s show-cause...